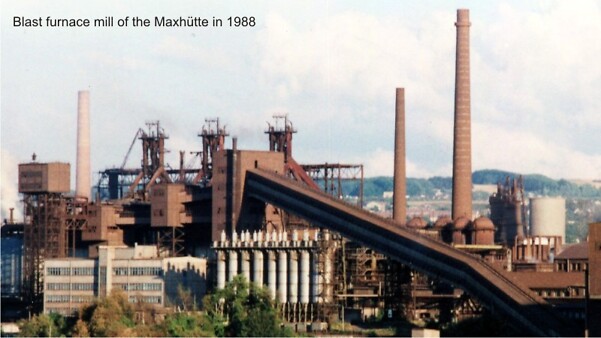 1872: On 8 January 1872 the administration office of the Duchy Sachsen-Meiningen approved the construction of a metallurgical plant in Unterwellenborn for the production of pig iron and cast iron. The applicant and owner is the “Eisenwerksgesellschaft Maximilianshütte” based in Haidhof/Sulzbach-Rosenberg. On that day the history of the steel production site Unterwellenborn starts and is successfully continued by Stahlwerk Thüringen ...

1878: After the erection and the commissioning of the metallurgical plant two blast furnaces and one Bessemer steel plant are put into operation.

1900: At the turn of the century two new blast furnaces and a Thomas steel works are built. These plants are more suited to the iron ore reserves of the local mining region of Kamsdorf.

from 1920: In the years after the First World War the steel plant is modernised and expanded with the erection of four new blast furnaces. Furthermore the Thomas steel works is newly installed. These facilities plus a rolling mill with blooming train supply the material required for a two high and a three-high train. At that time the steel plant produces small and middle size universal sections, angles, U-channels, flat steel, rails and permanent way material for railways.

1946: Despite partial destructions during the Second World War production starts on 6 February 1946 in the blast furnace II, the only blast furnace in the former Soviet occupation zone that has not been destroyed or damaged.

1985: The historically developed basic structure of the steel plant remains largely unchanged during the GDR era. On the other hand considerable efforts are made to increase productivity. In order to maintain the competitiveness of section production of the GDR at international level it has been decided, at the end of the 1970s, to build a modern rolling mill in Unterwellenborn. The combined section mill (KFS) was put into operation on 28 June 1985 and is the basis for the continued viability of the steel production site after the political change in the former GDR. The re-privatisation of the plant in 1992 is a perfect example for the successful development of a traditional East German industrial company.

1992: The Luxembourgian company “ARBED” acquires the combined section mill as well as parts of the premises. On 1st July 1992 “Stahlwerk Thüringen GmbH (SWT)” starts operation doing business under the new name. The comprehensive modernisation of the steel production site Unterwellenborn begins. The old blast furnaces, the basic oxygen steelmaking plant and the blooming train are shut down to create the area required for the new electric steel plant with continuous casting machine.

1995: Continuous operation of the new electric steel plant is started on 11 November 1995. Molten steel is produced again in Unterwellenborn for the first time in three years.

2002: Important plant equipment of the rolling train and the finishing department are replaced.

2006: Due to the merger of “Arcelor” with “Mittal Steel” and the antitrust law requirements, Stahlwerk Thüringen becomes part of the Spanish Alfonso Gallardo Group.

The de-dusting plant of the electric steelworks is modernised and enhanced, thus complying with the current and future environmental requirements.

2010: The new waste disposal site is commissioned. It is a further contribution to the environmental orientation.

2011: The new break down stand is installed in the rolling mill and put into operation.