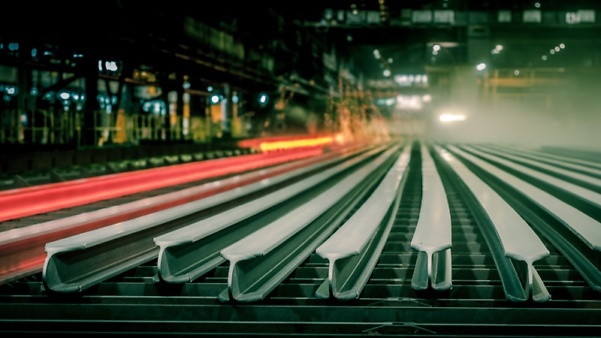 How our steel is produced: The section rolling mill.

The profile is formed in the section rolling mill.

The technological line of our rolling mill starts in the pusher type furnace. The beam blank coming from the electric steel plant can be directly fed into the furnace with the residual heat of the continuous casting process or they can be loaded into the furnace in a cold condition from the storage facility. The natural gas heated furnace heats the beam blanks to a temperature of 1.250°C. After taking the beam blank out of the furnace it is descaled in a descaling unit by using high-pressure water jets which remove the oxidised layer. The beam blanks are then ready for the rolling process.

This process is carried out in our section rolling mill which is one of the most modern section rolling trains in Europe. Its capacity depends on the form and size of the profile steel and is between 70 and 200 t per hour.

In the break down stand the beam blank is subjected to deformation and gets its bloom form by running in several reversing passes alternately forwards and backwards. Both rolls of the stand are driven by an electric motor with a power of 4.400 kW. The stand has a maximum rolling force of 10.000 kN.

The tandem group with its three stands positioned one after another over a short distance follows the break down stand. During the deformation process the beam is passed through all three stands. The tandem group also works according to the reversing principle. After each pass the distance between the rolls is reduced to get a reduction of the cross section. After the last pass the beam enters the finishing group where the specified final dimensions are formed.

By continuously reducing the cross section the beams with an initial length of 11.5 meters are rolled to a length of 100 meters. The sections are given their final form and size in the finishing stand. The processes of the rolling stands are principally computerised, thus the primary functions of the rolling mill staff are monitoring and checking activities.

High flexibility and performance thanks to rapid stand change.

The rolls are our tools for the steel deformation. Our roll turning shop produces them from roll blanks with a weight up to 22 tons; worn rolls coming from the rolling mill are re-machined on CNC controlled roll turning lathes. Adjacent to the rolling train is the roll changing shop where we prepare the rolls and stands for the next rolling campaign. In order to achieve high rolling quantities through quick and flexible change over times, we have to work very precisely. We carry out the stand change for all stand groups in less than 20 minutes. Shortly after the stand change the new profile can be rolled.

After having passed the deformation process the hot sections of approx. 950°C enter into a measuring device where the geometry of the profile is checked at several defined points using laser technology. The sections enter this profile measuring device at a speed of nearly 10 m per second. They are braked on the roller table in front of the cooling bed where material sampling for the final analysis in the test laboratories and in our quality assurance department is carried out. Afterwards the sections travel to the 100 m cooling bed which connects the rolling train with the finishing department. The walking beam cooling bed transports the hot sections gradually over the cooling bed while they cool down by means of air convection to a temperature of approx. 80°C ready for straightening.

In our quality assurance department we check the individual material test pieces using various test procedures. We carry out this testing according to the applicable standards and the individual customer requirements. Our testing methods include the tensile test and the impact test. All inspections are part of our certified and integrated management system.